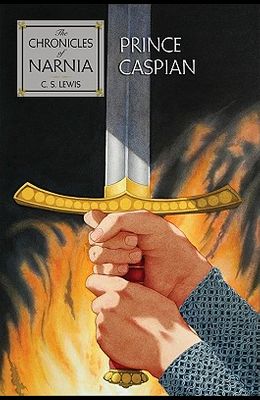 Prince Caspian: The Return to Narnia

Book #4 in the The Chronicles of Narnia (Chronological Order) Series
by
C S Lewis and Pauline Baynes
$3.88
Select Format

A beautiful paperback edition of C. S. Lewis's Prince Caspian , book four in the classic fantasy series, The Chronicles of Narnia , featuring cover art from three time Caldecott Medal-winning illustrator David Wiesner and interior black-and-white artwork by the original illustrator, Pauline Baynes. The Pevensie siblings travel back to Narnia to help a prince denied his rightful throne as he gathers an army in a desperate attempt to rid his land of a false king. But in the end, it is a battle of honor between two men alone that will decide the fate of an entire world. Prince Caspian is the fourth book in C. S. Lewis's classic fantasy series, which has been drawing readers of all ages into a magical land with unforgettable characters for over sixty years. This is a stand-alone novel, but if you would like to read about more Narnian adventures, pick up The Voyage of the Dawn Treader , the fifth book in The Chronicles of Narnia .

From the Back Cover Narnia ... The land between the lamp-post and the castle of Cair Paravel, where animals talk, where magical things happen ... and where the adventure begins. Peter, Susan, Edmund, and Lucy are returning to boarding school when they are summoned from the dreary train station (by Susan's magic horn) to return to the land of Narnia -- the land where they had ruled as kings and queens and where their help is desperately needed.

List of All Editions of Prince Caspian: The Return to Narnia