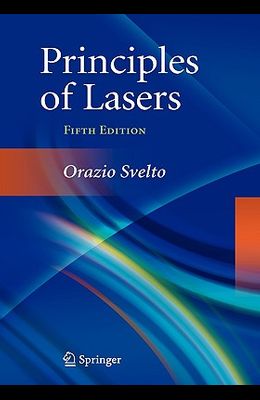 This book is motivated by the very favorable reception given to the previous editions as well as by the considerable range of new developments in the laser ?eld since the publication of the third edition in 1989. These new developmentsinclude, among others, Quantum-Well and Multiple-Quantum Well lasers, diode-pumpedsolid-state lasers, new concepts for both stable and unstable resonators, femtosecond lasers, ultra-high-brightness lasers etc. The basic aim of the book has remained the same, namely to providea broad and uni?ed description of laser behavior at the simplest level which is compatible with a correct physical understanding. The book is thereforeintendedas a text-bookfor a senior-levelor ?rst-year graduatecourse and/or as a reference book. This edition corrects several errors introduced in the previous edition. The most relevant additions or changes to since the third edition can be summarized as follows: 1. A much-more detailed description of Ampli?ed Spontaneous Emission has been given Chapt. 2] and a novel simpli?ed treatment of this phenomenon both for homogeneousor inhomogeneouslines has been introduced Appendix C]. 2. A major fraction of a chapter Chapt. 3] is dedicated to the interaction of radiation with semiconductor media, either in a bulk form or in a quantum-con?ned structure (quantum-well, quantum-wire and quantum dot). 3. A moderntheory of stable and unstable resonatorsis introduced, where a more ext- sive use is made of the ABCD matrix formalism and where the most recent topics of dynamically stable resonators as well as unstable resonators, with mirrors having Gaussian or super-Gaussian transverse re?ectivity pro?les, are considered Chapt. 5].

From the Back Cover This new Fifth Edition of Principles of Lasers incorporates corrections to the previous edition. The text's essential mission remains the same: to provide a wide-ranging yet unified description of laser behavior, physics, technology, and current applications. Dr. Svelto emphasizes the physical rather than the mathematical aspects of lasers, and presents the subject in the simplest terms compatible with a correct physical understanding. Praise for earlier editions: Professor Svelto is himself a longtime laser pioneer and his text shows the breadth of his broad acquaintance with all aspects of the field ... Anyone mastering the contents of this book will be well prepared to understand advanced treatises and research papers in laser science and technology. (Arthur L. Schawlow, 1981 Nobel Laureate in Physics) Already well established as a self-contained introduction to the physics and technology of lasers ... Professor Svelto's book, in this lucid translation by David Hanna, can be strongly recommended for self-study or teaching at the final-year undergraduate or first-year post-graduate levels. (Physics Bulletin) A thorough understanding of this book in conjunction with one of the existing volumes on laser safety will go a long way in providing the health physicist with the understanding he needs ... Highly recommended. (Health Physics) Introduces laser science and technology with the accessibility appropriate for the nonspecialist and the enthusiasm of the pioneer. (Laser Focus) A very good introduction to laser theory and practice ... aimed at upper-level undergraduate students. It is logically organized and easy to read ... Most of the basic mathematical framework needed to understand this evolving field is presented. Every chapter contains a good set of problems, answers to some of which are given in the back. (Sci-Tech News) Orazio Svelto is Professor of Quantum Electronics at the Polytechnic Institute of Milan and Director of the Quantum Electronics Center of the Italian National Research Council. His research has covered a wide range of activity in the field of laser physics and quantum electronics, starting from the very beginning of these disciplines. This activity includes ultrashort-pulse generation and applications, development of laser resonators and mode-selection techniques, laser applications in biology and medicine, and development of solid-state lasers. Professor Svelto is the author of more than 150 scientific papers and his researches have been the subject of more than 50 invited papers and international conferences. He has served as a program chair of the IX International Quantum Electronics Conference (1976), as a chair of the European program committee for CLEO '85 and CLEO '90, and he was general co-chair for the first CLEO-Europe Conference (1994). He is an elected member of the Italian Accademia dei XL and a Fellow of the IEEE.