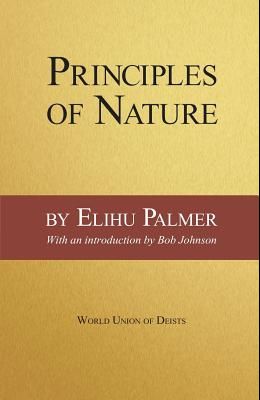 One of the most difficult thngs for a person to do is to admit they are wrong. Elihu Palmer, the author of Principles of Nature , had the strength of character and love of honesty to not only admit he was wrong to embrace and promote Christianity, he also did all he could to correct the problem of Christianity and revealed religion with God-given innate reason and Deism. This is especially admirable since Elihu Palmer was a sincere Christian clergyman at the time, who evolved into a Deist. This book offers the reader enlightenment and peace of mind through the freedom of Deism. A new profound appreciation of your God-given reason will be stirred along with a desire to learn all you can about the natural and reason friendly religious philosophy of Deism. Thomas Paine, a Deist leader and American Founding Father, wrote the following to his friend and fellow Deist Elihu Palmer regarding Principles of Nature I see you have thought deeply on the subject, and expressed you thoughts in a strong and clear style. The hinting and intimating manner of writing that was formerly used on subjects of this kind produced skepticism, but not conviction. It is necessary to be bold. Some people can be reasoned into sense, and others must be shocked into it. Say a bold thing that will stagger them, and they will begin to think.