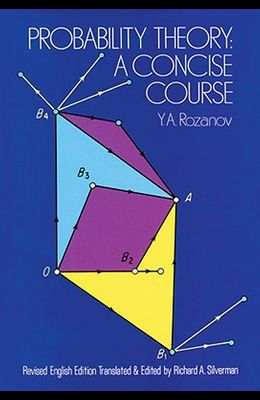 This book, a concise introduction to modern probability theory and certain of its ramifications, deals with a subject indispensable to natural scientists and mathematicians alike. Here the readers, with some knowledge of mathematics, will find an excellent treatment of the elements of probability together with numerous applications. Professor Y. A. Rozanov, an internationally known mathematician whose work in probability theory and stochastic processes has received wide acclaim, combines succinctness of style with a judicious selection of topics. His book is highly readable, fast-moving, and self-contained. The author begins with basic concepts and moves on to combination of events, dependent events and random variables. He then covers Bernoulli trials and the De Moivre-Laplace theorem, which involve three important probability distributions (binomial, Poisson, and normal or Gaussian). The last three chapters are devoted to limit theorems, a detailed treatment of Markov chains, continuous Markov processes. Also included are appendixes on information theory, game theory, branching processes, and problems of optimal control. Each of the eight chapters and four appendixes has been equipped with numerous relevant problems (150 of them), many with hints and answers. This volume is another in the popular series of fine translations from the Russian by Richard A. Silverman. Dr. Silverman, a former member of the Courant Institute of Mathematical Sciences of New York University and the Lincoln Laboratory of the Massachusetts Institute of Technology, is himself the author of numerous papers on applied probability theory. He has heavily revised the English edition and added new material. The clear exposition, the ample illustrations and problems, the cross-references, index, and bibliography make this book useful for self-study or the classroom.

List of All Editions of Probability Theory: A Concise Course