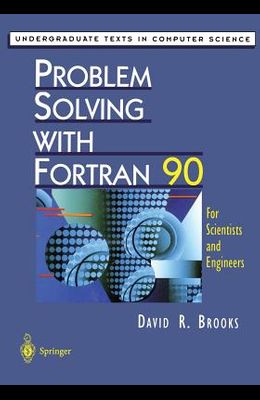 Problem Solving with FORTRAN 90: For Scientists and Engineers

i.l Overview for Instructors The purpose of this text is to provide an introduction to the problem-solving capabilities of Fortran 90. The intended audience is undergraduate science and engineering students who have not previously taken a formal programming course. The focus is on the process of solving computational problems of interest to scientists and engineers, rather than on programming per se, which has several important implications for the contents of the text, as outlined later in the Preface. Fortran has long been favored as an introductory programming language for engineering and science students because of its historical roots and continued prominence in the professional practice of these disciplines. The Fortran 77 standard has been taught, within an essentially mainframe context, to an entire generation of scientists and engineers. However, many of the science and engineering calculations that, a generation ago, could be done only on mainframe computers can now be done on desktop computers, often using applications that don't require any programming at all.

List of All Editions of Problem Solving with FORTRAN 90: For Scientists and Engineers