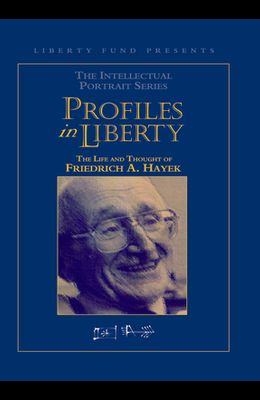 Profiles in Liberty: The Life and Thought of Friedrich A. Hayek (DVD)

by
F A Hayek

The twentieth century witnessed the unparalleled expansion of government power over the lives and livelihoods of individuals. Much of this was the result of two devastating world wars and totalitarian ideologies that directly challenged individual liberty and the free institutions of the open society. Other forms of expansion in the provision of social welfare and the regulation of the economy, while more benign in their objectives, nevertheless posed significant challenges to personal freedom. Few individuals did more to both extend our understanding of the economic processes of the free society and alert us to the dangers inherent in the growth of political power than the Nobel laureate economist and social theorist Friedrich A. Hayek. In over half a century of writing and teaching, he showed why national socialism was the very antithesis of capitalism, why communism was an economic and political philosophy ultimately doomed to failure, and why we must be wary of government intervention if we are to preserve the freedoms that make democracy and prosperity possible. Over the course of his intellectual career, Hayek set out an inspiring vision for a free society, based on principles elaborated in such works as The Constitution of Liberty and Law, Legislation, and Liberty . In a life that spanned almost the entire twentieth century, he went from being dismissed, ridiculed, and ignored to being recognized and acclaimed as perhaps this century's most significant social scientist and philosopher. To a remarkable degree, his story is the story of the twentieth century.