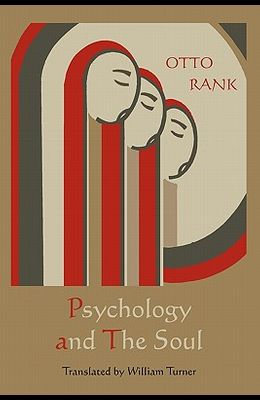 Psychology and the Soul

2011 Reprint of 1950 Translation by William Turner. Full facsimile of the original edition, not reproduced with Optical Recognition Software. Recommended, both as a fascinating and little-known document in the history of psychology and as a provocative reading of the history of psychology. (Religious Studies Review). Will interest many students of the history of psychoanalysis... Rank's conclusions contribute to present-day controversies about the status of psychoanalysis as a science. (Psychiatric Times ) The first complete English translation of a work that Rank published in 1930. It draws on anthropology, sociology, mythology, religion, philosophy, history, and literature to chart the development of the human psyche... The book's antimaterialistic passion makes it a compelling counterpoint to the stern biology of our own age, and the bounds it sets to what psychoanalysis can claim are justly drawn. (Wilson Quarterly ) Unquestionably Rank's most important work... This new translation is an effort to create a Rank for our millennium... and it] reads elegantly and comfortably in English... The argument is complex and intricate, consisting of a long historical/ethnographic sweep that takes us from a 'primitive' state, via animism through the Christian or sexual era to the scientific era and modern development of psychology... Along the way we find traces of many of Rank's other brilliant psychological surveys -- the double, Don Juan, heroes' birth myths, the theme of incest -- woven into this massive canvas and viewed on the largest scale... Throughout this book, the grand tapestry is set with some remarkable gems of observation. (Naomi Segal Psychoanalysis and History ) This is the first complete translation of Otto Rank's fascinating text on the nature and history of the concept of the Soul and Will in the psychological history of humankind... a tour de force in vigour, scope and application to many contemporary issues such as sexual behaviors, the nature of dreaming, incest prohibitions and narcissism, to name but a few. (L.R. Edgar Journal of the Royal Anthropological Society ) In his last years, Otto Rank turned his lifetime of thought and learning toward two of the most difficult topics in human history: religion and the soul. The result was this now-classic work, available in this new, very accessible English translation. Unlike many other intellectuals of the twentieth century, Rank maintains a place for the soul rather than dismissing it as a fantasy. The soul and the beliefs about it, he argues, set forth the foundation for psychology, with its complex analyses of consciousness, self-consciousness, and personality. Rank's commentary is not limited to beliefs about individual souls but includes ideas about group souls, sometimes encompassing nations or generations. Rank suggests that it is in expression of group beliefs that the idea of the soul attains its greatest power. What is the soul? Otto Rank treats it as a universal and essential belief for individuals and their societies, constant in function but evolving in form through millennia. To borrow a post-Rankian metaphor, the soul was created in the big bang of irresistible psychological force colliding with immutable biological fact-our will to live forever against death. The collision creates a spark in our individual and social consciousness which through history has become both consolation and inspiration: the immortal soul. All ideologies reflect this phenomenon and modify its expression to suit the era. Otto Rank wrote before the atom bomb or television, both of which alter our perception of death without changing the fact. Rank's introduction of the soul as an essential part of contemporary psychology helps explain a number of perplexing, irrational phenomena in contemporary life.

Frequently Asked Questions About Psychology and the Soul

List of All Editions of Psychology and the Soul