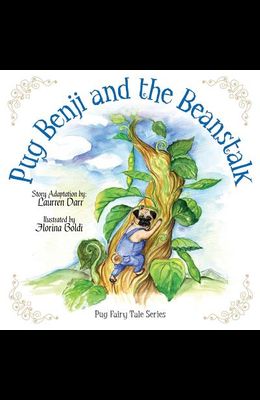 Pug Benji and the Beanstalk

A poor widow pug and her son, Benji, eek out a living by selling the milk of their only cow at the market. One day, the cow won't give them any milk, so his mother sends Benji to sell her at the market. Benji trades the cow to an old man for some magic beans instead. His mother tosses the beans out the window, but by morning, an enormous beanstalk has sprung up outside the house. Brave Benji climbs the beanstalk, only to encounter a giant who has a taste for broiled pugs. How will Benji get out of this scrape...and get back in the good graces of his mother? In this fun, raucous retelling of Jack and the Beanstalk, lovingly adapted by Laurren Darr and illustrated by Florina Boldi, a mischievous little pug learns not only how to escape the clutches of a pug-hungry giant, but the value of doing the right thing. About The Author: Laurren Darr has been 'owned' by pugs since her first pug rescue of White Pines Tuttie when she was just six years old. Tuttie had never been out of a cage or even uttered a bark. She was the joy of Laurren's life until she left this world at the age of 15 (human years, of course ). This silly pug would let Laurren dress her, put clippy earrings on her, and even put lipstick on her. They'd spend hours tootling around the neighborhood dressed in their Sunday best, which is why Tuttie served as the inspiration for the launch of the International Association of Pet Fashion Professionals over thirty years later. Laurren has had many pugs since. Zacchaeus was a gift to her for her 16th birthday. She has also featured family rescue pugs Inky & Sarge (brother and sister) and Benji, in her Pug Fairy Tale Series story adaptations. Her busy Chicago-area home is filled with her husband, her son, a fabulously fashionable pug named Bella and a blue and gold macaw, Kao.

List of All Editions of Pug Benji and the Beanstalk