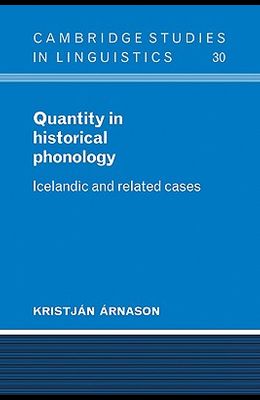 The study of syllable quantity and vowel length raises issues of considerable importance for phonology and historical linguistics in general. Among Indo-European languages, the phonological structure of Modern Icelandic is of particular interest because of the so-called 'quantity shift', which is part of its historical background and which changed the inherited Old Icelandic structure. In this rich case-study Dr Arnason analyses the changes that led to the shift, using among other things the metrical works as evidence. He shows that in Modern Icelandic vowel length is determined by syllabic quantity, which is in turn defined by stress. Close attention is paid to related phenomena in other languages and, against this comparative background, Dr Arnason calls into question the validity and theoretical status of existing 'explanations' of linguistic change. This is then a study for those interested in Scandinavian languages but it has wider theoretical implications for all historical linguists.