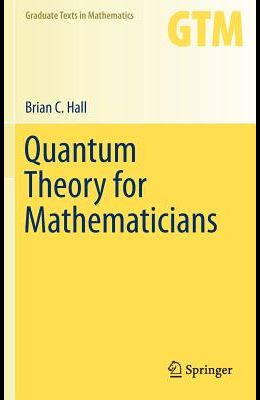 From the Back Cover Although ideas from quantum physics play an important role in many parts of modern mathematics, there are few books about quantum mechanics aimed at mathematicians. This book introduces the main ideas of quantum mechanics in language familiar to mathematicians. Readers with little prior exposure to physics will enjoy the book's conversational tone as they delve into such topics as the Hilbert space approach to quantum theory; the Schrödinger equation in one space dimension; the Spectral Theorem for bounded and unbounded self-adjoint operators; the Stone-von Neumann Theorem; the Wentzel-Kramers-Brillouin approximation; the role of Lie groups and Lie algebras in quantum mechanics; and the path-integral approach to quantum mechanics. The numerous exercises at the end of each chapter make the book suitable for both graduate courses and independent study. Most of the text is accessible to graduate students in mathematics who have had a first course in real analysis, covering the basics of L2 spaces and Hilbert spaces. The final chapters introduce readers who are familiar with the theory of manifolds to more advanced topics, including geometric quantization.