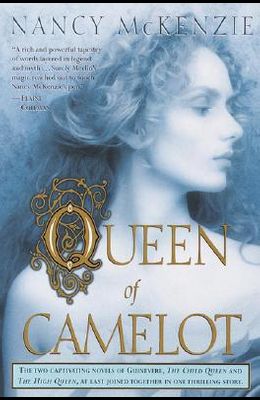 Illuminating the timeless Arthurian tale of love and treachery from the pointof Guinevere, this two-in-one volume contains The Child Queen and The HighQueen.

From the front Cover Guinevere comes alive-a strong, resourceful, and compassionate woman, accessible to modern folk . . . McKenzie makes a quantum leap in defining the character of Guinevere as a real, flesh-and-blood woman. The Arthur-Guinevere-Lancelot triangle comes alive as well-believable, poignant, and bearing the seeds of tragedy. -KATHERINE KURTZ On the night of Guinevere's birth, a wise woman declares a prophecy of doom for the child: She will be gwenhwyfar, the white shadow, destined to betray her king, and be herself betrayed. Years pass, and Guinevere becomes a great beauty, riding free across Northern Wales on her beloved horse. She is entranced by the tales of the valorous Arthur, a courageous warrior who seems to Guinevere no mere man, but a legend. Then she finds herself betrothed to that same famous king, a hero who commands her willing devotion. Just as his knights and all his subjects, she falls under Arthur's spell. At the side of King Arthur, Guinevere reigns strong and true. Yet she soon learns how the dark prophecy will reveal itself. She is unable to conceive. Arthur's only true heir is Mordred, offspring of a cursed encounter with the witch Morgause. Now Guinevere must make a fateful choice: She decides to raise Mordred, teaching him to be a ruler and to honor Camelot. She will love him like a mother. Mordred will be her greatest joy-and the key to her ultimate downfall. Return to a time of legend-the days of Guinevere and Arthur and the glory that was to become Camelot

Queen of Camelot Series In Order - By Nancy McKenzie