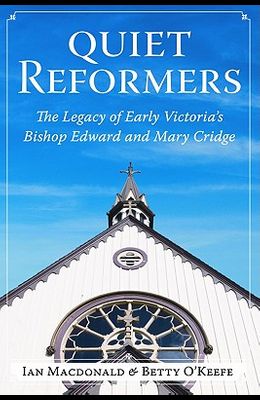 by
Ian MacDonald and Betty OKeefe

No pair made a greater contribution to colonial life on Canada's West Coast than did Edward and Mary Cridge. While still in England, Edward Cridge was hired by the Hudson's Bay Company to be the chaplain for Victoria, its outpost on the Pacific. Arriving in 1855, the Cridges joined some 260 others who formed the nucleus of the new settlement. They led the way in social and religious reform, with Mary Cridge contributing in a major way to the development of a women's hospital ward and a children's orphanage. In addition to his pastoral duties, Edward Cridge acted as advisor and confidant to Governor James Douglas. In later life, Cridge became the unlikely central figure in a religious conflict that divided Victorians at a time when the church was central to everyday life. He was labelled a renegade by some and walked away from his beloved Church of England after a disagreement with his bishop over the style of worship. He then established the Church of Our Lord in Victoria. It remains a fascinating heritage building in the centre of the capital. In the history of those who were tried and tested in Victoria's pioneering era, none gave more of themselves than Edward and Mary Cridge.