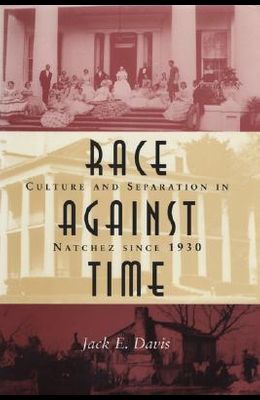 Race Against Time: Culture and Separation in Natchez Since 1930

While many studies of race relations have focused on the black experience, Race against Time strives to unravel the emotional and cultural foundations of race in the white mind. Jack E. Davis combed primary documents in Natchez, Mississippi, and absorbed the town's oral history to understand white racial attitudes there over the past seven decades, a period rich in social change, strife, and reconciliation. What he found in this community that cultivates for profit a romantic view of the Old South challenges conventional assumptions about racial prejudice. Davis engagingly and effortlessly weaves between nineteenth and twentieth centuries, white observations and black, to describe patterns of social interaction in Natchez in the workplace, education, politics, religion, and daily life. It was not, he discovers, false notions of biological differences reinforced by class and economic conflict that lay at the heart of the town's racial divide but rather the perception of a black/white cultural divergence -- in values in education, work, and family. White culture was deemed superior, a presumption manifested through a hierarchy of old-family elite and other white citizens. Since 1930, Natchez has developed a major tourist industry, downsized sharecropping, expanded its manufacturing sector, and participated in the struggles for civil rights, school desegregation, and black political empowerment. Yet the collective white perception of a mythic past has continued, reinforced through the sum of Natchez's public history -- social memory, school textbooks, breathtaking antebellum mansions, and world-famous Pilgrimage. In Race against Time, Davis sensitively lays bare the need for shared control of the town's history and the acknowledgment of intercultural dependence to effect true racial equality. Building upon the 1941 classic Deep South: A Social Anthropological Study of Caste and Class, Davis brings tremendous passion and insight to the demanding issue of race as he fathoms the contours of Natchez's distinctive racial dynamics in recent decades.

List of All Editions of Race Against Time: Culture and Separation in Natchez Since 1930