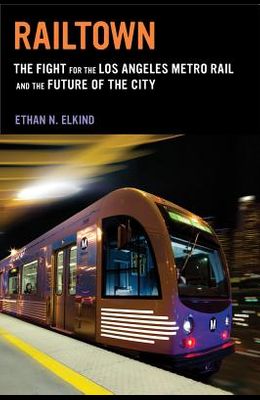 Railtown: The Fight for the Los Angeles Metro Rail and the Future of the City

The familiar image of Los Angeles as a metropolis built for the automobile is crumbling. Traffic, air pollution, and sprawl motivated citizens to support urban rail as an alternative to driving, and the city has started to reinvent itself by developing compact neighborhoods adjacent to transit. As a result of pressure from local leaders, particularly with the election of Tom Bradley as mayor in 1973, the Los Angeles Metro Rail gradually took shape in the consummate car city. Railtown presents the history of this system by drawing on archival documents, contemporary news accounts, and interviews with many of the key players to provide critical behind-the-scenes accounts of the people and forces that shaped the system. Ethan Elkind brings this important story to life by showing how ambitious local leaders zealously advocated for rail transit and ultimately persuaded an ambivalent electorate and federal leaders to support their vision. Although Metro Rail is growing in ridership and political importance, with expansions in the pipeline, Elkind argues that local leaders will need to reform the rail planning and implementation process to avoid repeating past mistakes and to ensure that Metro Rail supports a burgeoning demand for transit-oriented neighborhoods in Los Angeles. This engaging history of Metro Rail provides lessons for how the American car-dominated cities of today can reinvent themselves as thriving railtowns of tomorrow.

From the front Cover Finally, a comprehensive history of the rebirth of rail in Los Angeles. Railtown is a lively book grounded in extensive research into the tangled history of rail planning and construction- a subject important to both California and to the United States as a whole. --Zachary M. Schrag, author of The Great Society Subway: A History of the Washington Metro Railtown is a gripping account of rail transit's re-emergence in America's consummate car-oriented city. Elkind deftly chronicles the political machinations that gave rise to what today is one of America's most expansive and promising urban rail networks. Railtown is a must-read for students of urban politics, history, and planning.--Robert Cervero, author of The Transit Metropolis