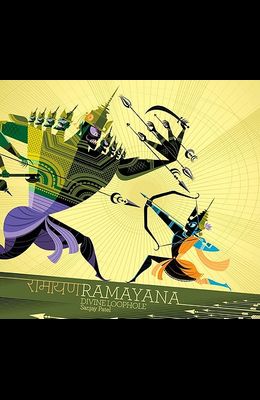 A 21st century retelling of a 2500-year old story One of Hindu mythology's best-loved and most enduring tales gets a modern touch: Artist and veteran Pixar animator Sanjay Patel lends a lush, whimsical illustration style and lighthearted voice to one of Hindu mythology's best-loved and most enduring tales. Teeming with powerful deities, love-struck monsters, flying monkey gods, magic weapons, demon armies, and divine love, Ramayana: Divine Loophole tells the story of Rama, a god-turned-prince, and his quest to rescue his wife Sita after she is kidnapped by a demon king. - Illustrated tale features over 100 colorful full-spread illustrations, a detailed pictorial glossary of the cast of characters who make up the epic tale, and sketches of the work in progress - An ancient mythology with timeless, essential and meaningful themes - Sanjay Patel is the author of The Little Book of Hindu Deities while an animator and storyboard artist for Pixar Animation Studios, he worked on numerous films, including Monsters, Inc. ; A Bug's Life ; Toy Story 2 ; Ratatouille ; The Incredibles ; and Toy Story 3 . His short film Sanjay's Super Team was nominated for an Academy Award for Best Animated Short Film Fans of Sanjay Patel's The Little Book of Hindu Deities: From the Goddess of Wealth to the Sacred Cow and Ganesha's Sweet Tooth will be entranced by the images and story in Ramayana: Divine Loophole . From princesses in peril to gripping battles, scheming royals, and hordes of bloodthirsty demons, Ramayana: Divine Loophole is the ultimate adventure story presented with an unforgettably modern touch. - Great book for the entire family to enjoy together - An engaging way to teach children about Hindu mythology