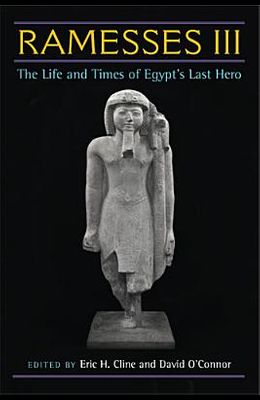 Ramesses III: The Life and Times of Egypt's Last Hero

In the tumultuous and vivid history of New Kingdom Egypt, Ramesses III's reign was prosperous and culturally rich. He fended off attacks by the Sea Peoples and others who threatened the state, he built the great temple of Medinet Habu, and he left wonderfully complete documents describing contemporary social structure and the economy. Amazingly, we even have an account from a contemporary judicial document that describes events leading to Ramesses III's assassination. This edited collection presents a detailed and informative look at the life, career, and world of one of Egypt's most important pharaohs, providing insight both on his reign and its aftermath and on the study of the political and cultural history of ancient Egypt. This collection offers the best new scholarship on Ramesses III, with contributions from Christopher J. Eyre; Ogden Goelet, Jr.; Peter W. Haider; Carolyn R. Higginbotham; Kenneth A. Kitchen; Bojana Mojsov; Steven R. Snape; Emily Teeter; and James M. Weinstein, as well as from David O'Connor and Eric H. Cline. It will be of interest to those with an informed amateur's interest in Egyptology as well as to scholars of Egyptian and biblical archaeology.