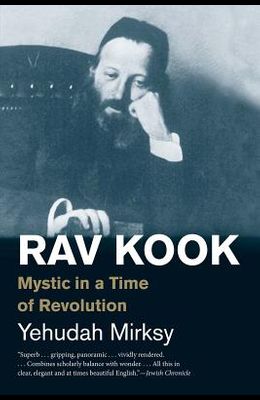 Rav Kook: Mystic in a Time of Revolution

Part of the Jewish Lives Series
by
Yehudah Mirsky

The life and thought of a forceful figure in Israel's religious and political life Rav Abraham Isaac Kook (1865-1935) was one of the most influential--and controversial--rabbis of the twentieth century. A visionary writer and outstanding rabbinic leader, Kook was a philosopher, mystic, poet, jurist, communal leader, and veritable saint. The first chief rabbi of Jewish Palestine and the founding theologian of religious Zionism, he struggled to understand and shape his revolutionary times. His life and writings resonate with the defining tensions of Jewish life and thought. A powerfully original thinker, Rav Kook combined strict traditionalism and an embrace of modernity, Orthodoxy and tolerance, piety and audacity, scholasticism and ecstasy, and passionate nationalism with profound universalism. Though little known in the English-speaking world, his life and teachings are essential to understanding current Israeli politics, contemporary Jewish spirituality, and modern Jewish thought. This biography, the first in English in more than half a century, offers a rich and insightful portrait of the man and his complex legacy. Yehudah Mirsky clears away widespread misunderstandings of Kook's ideas and provides fresh insights into his personality and worldview. Mirsky demonstrates how Kook's richly erudite, dazzlingly poetic writings convey a breathtaking vision in which the old will become new, and the new will become holy.