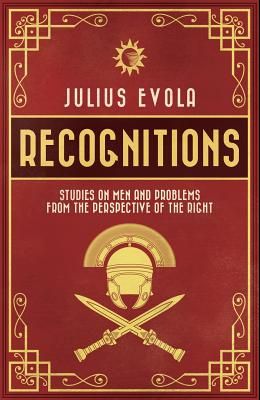 Recognitions: Studies on Men and Problems from the Perspective of the Right

This volume contains a rich collection of Julius Evola's late essays. Distilling the work of a lifetime, these essays, despite the great diversity of their subjects, all depart from Evola's basic and intransigent principles. From a consideration of specific personalities, such as Donoso CortEs, Vilfredo Pareto, Joseph de Maistre, Metternich, Michelstaedter, and Henry Miller, to the investigation of an entire series of problems, such as the revolution from the heights, the twilight of the East, the myth of the West, political versus biological youth, and the emergence of the Fifth Estate, this book also includes doctrinal analyses of Zen Buddhism, the so-called Left-Hand Path, the myth of the future regality, neo-realism, and the fetish for magic -- analyses which delve atimes also into the past, as in the evocation of Emperor Julian, the indication of the significance which the Sibylline Books had in Ancient Rome, and the investigation into the mysteries of Mithras. The material herein is wide and various, but in all cases of perennial interest, and Evola's treatment brings essential normative values to the fore -- values which might serve for the interior and spiritual formation of a new generation.

Books similiar to Recognitions: Studies on Men and Problems from the Perspective of the Right

List of All Editions of Recognitions: Studies on Men and Problems from the Perspective of the Right