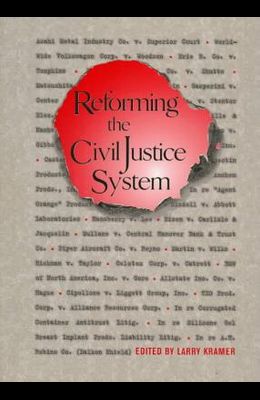 With the recent explosion of high-profile court cases and staggering jury awards, America's justice system has moved to the forefront of our nation's consciousness. Yet while the average citizen is bombarded with information about a few sensational cases--such as the multi-million dollar damages awarded a woman who burned herself with McDonald's coffee-- most Americans are unaware of the truly dramatic transformation our courts and judicial system have undergone over the past three decades, and of the need to reform the system to adapt to that transformation. In Reforming the Civil Justice System , Larry Kramer has compiled a work that charts these revolutionary changes and offers solutions to the problems they present. Organized into three parts, the book investigates such topics as settlement incentives and joint tortfeasors, substance and form in the treatment of scientific evidence after Daubert v. Merrell Dow, and guiding jurors in valuing pain and suffering damages. Reforming the Civil Justice System offers feasible solutions that can realistically be adopted as our civil justice system continues to be refined and improved.

List of All Editions of Reforming the Civil Justice System