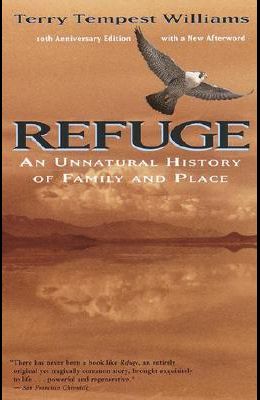 Refuge: An Unnatural History of Family and Place

As Utah-born naturalist Terry Tempest Williams records the simultaneous tragedies of her mother's death of cancer and the flooding of the Bear River Migratory Bird Sanctuary, she creates a document of renewal and spiritual grace destined to become a classic in the literature of nature, women, and grieving.

From the front Cover In the spring of 1983 Terry Tempest Williams learned that her mother was dying of cancer. That same season, The Great Salt Lake began to rise to record heights, threatening the herons, owls, and snowy egrets that Williams, a poet and naturalist, had come to gauge her life by. One event was nature at its most random, the other a by-product of rogue technology: Terry's mother, and Terry herself, had been exposed to the fallout of atomic bomb tests in the 1950s. As it interweaves these narratives of dying and accommodation, Refuge transforms tragedy into a document of renewal and spiritual grace, resulting in a work that has become a classic.