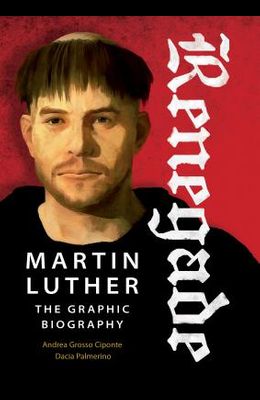 The life of reformer Martin Luther in the graphic novel format Gold Medal Winner , 2018 IPPY Book of the Year Award in Graphic Novels - Drama/Documentary, Independent Publishers Intriguing and informative. --Library Journal , Starred Review Five hundred years ago a brash young monk single-handedly confronted the most powerful institutions of his day. His bold stand sparked the Protestant Reformation and marked one of the great turning points in history. Martin Luther, a spiritual and historical giant, is loved and hated to this day--and for good reason. The anniversary of the revolution he helped start has produced a spate of doorstop-sized biographies. Luckily, today there exists a more accessible format that does justice to such a colorful, complex character and his tumultuous life and times - the graphic novel. In a world of grinding poverty, plague, and religious superstitions, a child of laborers distinguishes himself at university - until a lightning-bolt conversion lands him in a monastery. There his personal battles with disillusionment and doubt culminate in a cry for freedom. The rest is the stuff of history and legend: Luther's revolt against Rome with the nailing of ninety-five theses to the church door in Wittenberg; his time spent incognito at Wartburg Castle, where he famously throws an inkpot at the devil; his seditious translation and publication of the Bible in the language of the people; his scandalous marriage to former nun Katharina von Bora; and, in later years, his ugly tirades against peasants, Anabaptists, and Jews. Each chapter of Luther's life comes vividly to life thanks to cutting-edge graphic techniques, meticulous historical research, and compelling writing. This could be the biggest breakthrough for Martin Luther since the Gutenberg press.