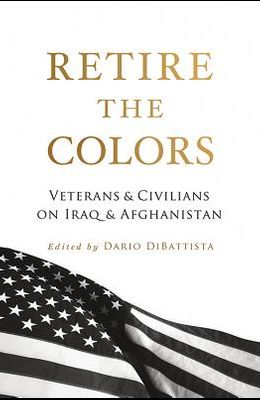 by
Dario DiBattista and Brian Castner and David Chrisinger

The impact of war, and the complex aftereffect it has on both veterans and civilians, is--for myriad reasons--largely invisible to the public. Media may create news cycles around horrors or stereotypes, but the effort required to redefine and sustain ''normal'' lives after war stays below the surface and out of sight. In Retire the Colors, nineteen thought-provoking stories by veterans and civilians consider the residual effects of Iraq and Afghanistan. A pacifist describes her decision to accompany her husband, an Iraq veteran, to the shooting range. A hospital worker in Mosul talks about what happens on a hunting trip back home with his grandfather. Two friends--one civilian one veteran--run an ultramarathon together. The wife of a combat medic considers their unusual nighttime routines. A mother and former 50 cal gunner navigates truth and lies with her children. These stories offer a grace uncommon in war literature today. They also make an appeal to readers: to witness with compassion the men and women who--because of war--possess the strength to show us what it means to be fully human. Contributors include: Tahani Alsandook, Joseph R. Bawden, Brian Castner, David Chrisinger, David P. Ervin, Teresa Fazio, CH Guise, Colin D. Halloran, Lauren Kay Halloran, Matthew J. Hefti, Brooke King, Randy Leonard, Eva KL Miller, Stewart Moss, Caitlin Pendola, Mark Solheim, Richard Allen Smith, Christopher Stowe, and Melissa Walker.