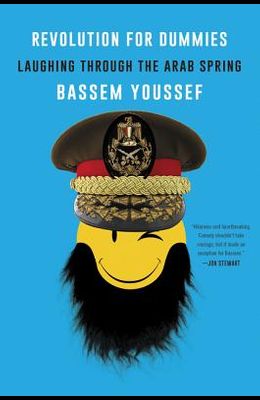 Revolution for Dummies: Laughing Through the Arab Spring

Hilarious and Heartbreaking. Comedy shouldn't take courage, but it made an exception for Bassem. --Jon Stewart The Jon Stewart of the Arabic World--the creator of The Program , the most popular television show in Egypt's history--chronicles his transformation from heart surgeon to political satirist, and offers crucial insight into the Arab Spring, the Egyptian Revolution, and the turmoil roiling the modern Middle East, all of which inspired the documentary about his life, Tickling Giants . Bassem Youssef's incendiary satirical news program, Al-Bernameg ( The Program ), chronicled the events of the 2011 Egyptian Revolution, the fall of President Hosni Mubarak, and the rise of Mubarak's successor, Mohamed Morsi. Youssef not only captured his nation's dissent but stamped it with his own brand of humorous political criticism, in which the Egyptian government became the prime laughing stock. So potent were Youssef's skits, jokes, and commentary, the authoritarian government accused him of insulting the Egyptian presidency and Islam. After a six-hour long police interrogation, Youssef was released. While his case was eventually dismissed, his television show was terminated, and Youssef, fearful for his safety, fled his homeland. In Revolution for Dummies , Youssef recounts his life and offers hysterical riffs on the hypocrisy, instability, and corruption that has long animated Egyptian politics. From the attempted cover-up of the violent clashes in Tahrir Square to the government's announcement that it had created the world's first AIDS cure machine, to the conviction of officials that Youssef was a CIA operative--recruited by Jon Stewart--to bring down the country through sarcasm. There's much more--and it's all insanely true. Interweaving the dramatic and inspiring stories of the development of his popular television show and his rise as the most contentious funny-man in Egypt, Youssef's humorous, fast-paced takes on dictatorship, revolution, and the unforeseeable destiny of democracy in the Modern Middle East offers much needed hope and more than a few healing laughs. A documentary about his life, Tickling Giants , debuted at the Tribeca Film Festival in 2016, and is now scheduled for major release.

From the Back Cover How does one start a revolution? With a microphone, a joke, and persistence, of course! Bassem Youssef, a satirist who rose to fame in the middle of the Egyptian Revolution with his incendiary brand of comedy and his knack for unabashedly mocking dictators, has been called the Jon Stewart of Egypt. Once a heart surgeon who filmed YouTube skits in the laundry room of his home, he eventually grew to become one of the most recognizable television hosts in Egyptian history, and his show became the most popular TV program in Egypt, much to the ire of the TV anchors, government officials, and military personnel who tried desperately to shut it down. So potent were Youssef's skits, jokes, and commentary that he was accused of insulting the Egyptian presidency, and even Islam itself, leading to a warrant in 2013 for his arrest. Despite turning himself in, Youssef was interrogated for six hours before being released on bail, which prompted his idol--Mr. Jon Stewart himself--to issue a statement on his behalf in an episode of The Daily Show . Though Youssef's case was eventually dismissed, his TV show was terminated, and he found himself fleeing Egypt in fear for his life. In Revolution for Dummies , Youssef proudly and hysterically riffs on the hypocrisy, instability, and corruption that manifested in Egyptian politics: everything from how the government tried to cover up the violent clashes in Tahrir Square to how the military announced they had created the world's first AIDS machine that could cure anyone of the disease to how officials were convinced Youssef was a CIA operative recruited by Jon Stewart, on a secret mission to bring down the country through sarcasm. (Yes, it gets that insane.) This is the version of the Arab Spring you've never heard, the one that doesn't get glossed over by the media's attempt to optimistically show promise of progress after revolution. This is the real story of guts and glory, and of how jokes are often mightier than the sword.