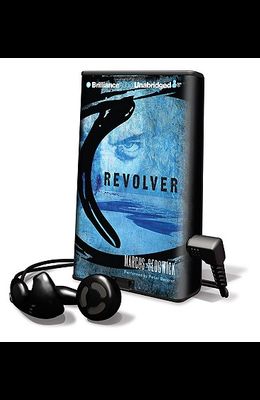 by
Marcus Sedgwick and Peter Berkrot

In an isolated cabin in an Arctic wilderness, 14 year old Sig is alone with a corpse: his father, who has fallen through the ice on the lake outside and frozen to death only hours earlier. Then, out of the Arctic darkness, comes a stranger: a terrifying giant of a man claiming that Sig s father owes him a share of a horde of stolen gold and threatening awful violence if Sig doesn t reveal the gold s whereabouts. Sig knows nothing about the gold, but he does know that there s a loaded Colt revolver hidden in the cabin s storeroom a gun that his father had said would protect him, but which his mother had abhorred. Revolver alternates between the lonely cabin and events during the Alaska Gold Rush ten years earlier, gradually unspooling the mystery of the stolen gold and the terrifying stranger, and building to a climax that turns on whether and why Sig will use the hidden gun. Revolver is a compelling frontier survival story, crafted with the intensity and precision of a one act play.