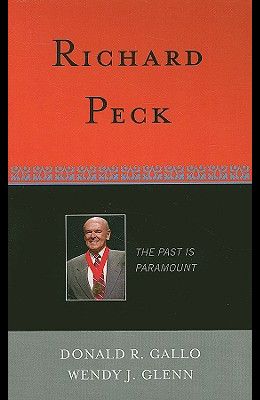 Richard Peck: The Past Is Paramount

One of the most revered authors of young adult books, Richard Peck has penned several critical and commercial successes including Dreamland Lake, The Ghost Belonged to Me, and the National Book Award finalist, A Long Way from Chicago. Peck's novels have also received prestigious awards including the Edgar for Are You in the House Alone? and the Newbery Medal for A Year Down Yonder. He is also the recipient of the Margaret A. Edwards Award, the National Humanities Medal, the ALAN Award, and the National Endowment for the Humanities Medallion. In Richard Peck: The Past Is Paramount, authors Donald R. Gallo and Wendy J. Glenn recount the highlights of Peck's life, focusing on his world travels, his accomplishments as a teacher and his renowned writing career. Gallo and Glenn examine Peck's 30 novels, as well as his short stories and children's books, poems, essays and other nonfiction. An additional chapter analyzes themes, characters, and style in his writing. The appendixes list Peck's many honors and prizes, as well as film adaptations of his works. The extensive bibliography cites all of Peck's primary and secondary works, along with sources of interviews, speeches, prayers and credos, articles about him, and sources of reviews of each of his books. For fans and scholars alike, Richard Peck: The Past Is Paramount is the most authoritative resource about the life and work of this beloved author.