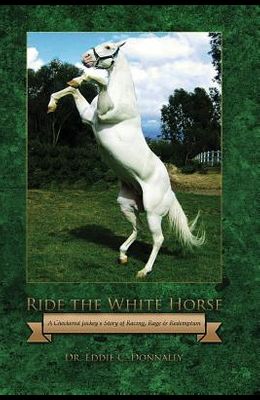 Ride the White Horse: A Checkered Jockey's Story of Racing, Rage and Redemption

-I've experienced racing from the hooves up, rage from the inside out and redemption from heaven down, - says author Eddie Donnally, an ordained minister, endorsed chaplain and the only former jockey to win an Eclipse Award for Outstanding Newspaper Writing. An electric jockey with a juice machine, he rode on racing's undercard, lived inside its underbelly and became a part of its underworld. From constant bulimia, broken bones and betrayal of Boston's infamous Winter Hill Gang, he depicts an unseen side of Thoroughbred racing. Yet the five tons of his sweat that disappeared down -hot box- drains was nothing compared to his struggles with sibling sexual trauma, same-sex promiscuity and an addiction to crack cocaine that in seven months took him from sports writing and TV show hosting to grooming horses on a track's backstretch. -I still dream of having a racehorse between my knees and love the people in horse racing.- he says. -But it was time to tell my truth about it. Seconds after a race fixing gangster slugged me, a pro hit man told me that he planned to kill me and put my naked body on Boston's Suffolk Downs backstretch as a warning to other jockeys.- Starting in 1962, he rode for 19-years in some 10,000 races, winning over 1,000. Arrested for Sports Bribery in 1979 for a fixed race he won in 1974, he was forced to fend off the FBI who pressured him to collaborate their star witness's testimony, as well as Boston's Winter Hill Gang members who would kill him if he did. Still, in 1980 he became a track publicity director and for seven years wrote horse racing for the Dallas Morning News. But a suicide attempt, a bipolar diagnosis and stays in two psyche wards were brief stops on a journey of self destruction that eventually landed him in jail. After God's Shekinah Glory lit up his holding cell in 1996, he moved to the Los Angeles Dream Center, the former Queen of Angels Hospital turned city of refugee for the homeless and hopeless. Less than five years after leaving jail, he became a licensed Foursquare Minister and then Development Director for Race Track Chaplaincy of America, which places chaplains at horse tracks. In 2009 he returned to seminary, earned a Doctorate of Ministry and after a 16-month hospital residency works as a chaplain at a hospice and two hospitals near Clearwater, FL where he lives with his wife Sandi. -As a jockey, I used highly illegal, hand-held electrical prods on horses in races. I threw up ten times a day to make weight, sweated off tons and broke 13 bones. I acted out as a bisexual, manic depressive, crack cocaine addicted sportswriter. Even today when I read what I wrote about the literally insane life I lived, the same old shivers ripple up my spine. Only though a series of God's miracles am I'm still alive to tell it at all.- -I rode Revelation's pale horse from hell and one day I'll ride across heaven following Jesus on Revelation's other white horse.- In conjunction with the book, he is writing a blog, -Recovery in Racing, - which profiles horse racing's best known members of its recovering community. Check out the book's website, www.Ridethewhitehorse.org Contact him at [email protected] com