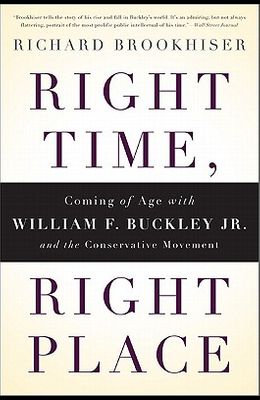 Richard Brookhiser wrote his first cover story for the renowned conservative magazine National Review in 1969, when he was fourteen, and became the magazine's youngest senior editor at age twenty-three. William F. Buckley Jr. was Brookhiser's mentor, hero, and admirer--but their relationship was, at times, a troubled one. Brookhiser remained a friend and colleague of Buckley throughout his time at the Review , however, and in Right Time, Right Place , Brookhiser tells the story of that tumultuous relationship with affection and clarity, while also providing a sparkling eyewitness account of the conservative intellectual and political ferment that Buckley nurtured and led.