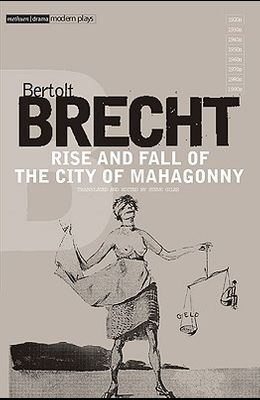 Rise and Fall of the City of Mahagonny

by
Bertolt Brecht and Steve Giles and Tom Kuhn

Brecht's operatic play produced with Hauptmann, Neher and Weill was first staged in 1930. The story is that three criminals create the city of Mahagonny. Drinking, gambling, prize-fights and similar activities are the sole occupation of the inhabitants, and money rules. Mahagonny is threatened by a hurricane at the end of Act 1, which despite much anticipation and causing much distress simply bypasses the city. In Act 2 following the hurricane nothing is forbidden and various scenes of debauchery occur. Jenny and Jim try to leave but Jim cannot pay his debts and is arrested. Another character arraigned for murder, bribes his way out of it, but Jim has no money and is condemned to death for not paying for his whisky. The opera ends with discontent destroying the city, which burns as the inhabitants march away. Translated and with commentary by Steve Giles, this critical edition is the first translation into English of the approved Versuche text of 1930/1. An important addition to Brecht scholarship, this edition contains a full introduction to the play, Brecht's writing and notes on the work, editorial notes and variants, and a study of contemporary productions and responses.