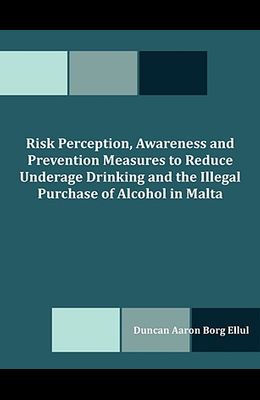 Risk Perception, Awareness and Prevention Measures to Reduce Underage Drinking and the Illegal Purchase of Alcohol in Malta

This dissertation examines the social context of underage drinking in terms of crime, mental disorder and social disability. The perception of risk and awareness of Maltese young people plays a significant role in the study. Through this study, it was found out that underage drinking in Malta is a problem and that students have misconception about Laws on alcohol. It was also established that the Law in Malta is neither being supported by the community nor strictly enforced. The study has reviewed the literature, which documented the importance, nature and extent of underage alcohol use in Malta. During the course of study, it was determined that young people are subjected to excessive pressure from school, parents, peers and/or other social reasons. The literature review has shown that if a person abuses alcohol, he or she might become an alcoholic. Whilst drinking may be seen as normative and socialised behaviour, binge drinking in young people is linked to risk-taking, sex, fights, accidental injuries, suicide, deaths and crime. The literature also revealed that the younger a person begins to drink, the greater the chance he or she will develop a problem with alcohol later in life. Based on the study being conducted, suggestions and recommendations are proposed on the wide range of strategies - from stricter enforcement of the Laws, relating to the sale of alcohol to minors; to prevention, treatment, rehabilitation and after-care.