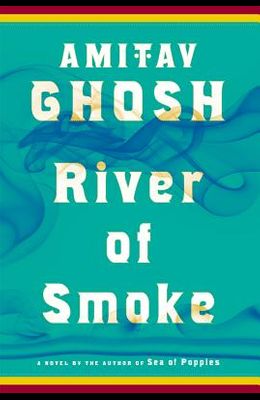 Book #2 in the Ibis Trilogy Series
by
Amitav Ghosh

A Washington Post Notable Fiction Book for 2011 The Ibis , loaded to its gunwales with a cargo of indentured servants, is in the grip of a cyclone in the Bay of Bengal; among the dozens flailing for survival are Neel, the pampered raja who has been convicted of embezzlement; Paulette, the French orphan masquerading as a deck-hand; and Deeti, the widowed poppy grower fleeing her homeland with her lover, Kalua. The storm also threatens the clipper ship Anahita , groaning with the largest consignment of opium ever to leave India for Canton. And the Redruth , a nursery ship, carries Frederick Fitcher Penrose, a horticulturist determined to track down the priceless treasures of China that are hidden in plain sight: its plants that have the power to heal, or beautify, or intoxicate. All will converge in Canton's Fanqui-town, or Foreign Enclave: a tumultuous world unto itself where civilizations clash and sometimes fuse. It is a powder keg awaiting a spark to ignite the Opium Wars. Spectacular coincidences, startling reversals of fortune, and tender love stories abound. But this is much more than an irresistible page-turner. The blind quest for money, the primacy of the drug trade, the concealment of base impulses behind the rhetoric of freedom: in River of Smoke the nineteenth and twenty-first centuries converge, and the result is a consuming historical novel with powerful contemporary resonance. Critics praised Sea of Poppies for its vibrant storytelling, antic humor, and rich narrative scope; now Amitav Ghosh continues the epic that has charmed and compelled readers all over the globe.