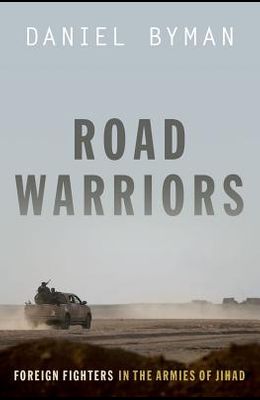 Road Warriors: Foreign Fighters in the Armies of Jihad

In Road Warriors , terrorism expert Daniel Byman traces the history of the jihadist foreign fighter movement. Through the biographies of key figures and histories of the groups, Byman chronicles the movement's birth in Afghanistan, growing pains in Bosnia and Chechnya, and emergence as a major terrorism scourge behind not only 9/11, but also attacks in Paris, Madrid, and beyond. He details the foreign fighters' role in Iraq after the 2003 U.S. overthrow of Saddam's regime and the impact of their mistakes. Foreign fighters reached their apogee in Syria during the nation's civil war, effectively combatting the Assad regime, the United States, and other foes on behalf of the Islamic State, one of the deadliest terrorist groups the world has known. Some fighters died in the first conflict zone they entered, while others became professional fighters, going from one war to the next. Still others sought to return home, some to peaceful retirement but a deadly few to conduct terrorist attacks. Both the United States and Europe have suffered and adapted as foreign fighter movements have evolved. Before 9/11, volunteers were able to go to and fro to Afghanistan and other hotspots with little interference. Today, the United States and its allies have developed a global program to identify, arrest, and kill foreign fighters. Much remains to be done, however -- jihadist ideas and networks are by now deeply embedded, even as groups such as Al Qaeda and the Islamic State rise and fall.