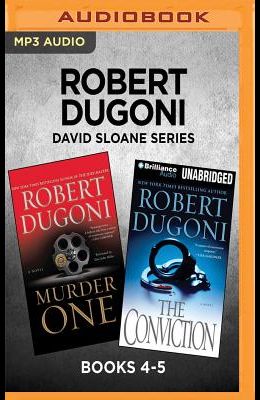 MURDER ONE A year after the murder of his wife, attorney David Sloane has returned to Seattle after three months in Mexico. At a black-tie dinner where he's been persuaded to give the keynote address, Sloane reconnects with Barclay Reid, opposing counsel in his most prominent case. Barclay is suffering from her own tragedy -- the death of her teenage daughter from a drug overdose. In the aftermath, Barclay has begun an intense crusade against the Russian drug traffickers she holds responsible for her daughter's death. Despite their adversarial past, Sloane is drawn to Barclay and for the first time since his wife died, he finds himself beginning to have romantic feelings again. But when Barclay's crusade stalls and a Russian drug dealer turns up dead, she stands accused of murder, and Sloane is her chosen defender. Amid the swirling media frenzy, Sloane finds himself once again in harm's way, while mounting evidence suggests that Barclay is a woman with many secrets -- and may not be as innocent as she seems. THE CONVICTION Lawyer David Sloane is desperate to get through to his troubled teenage son Jake. Still reeling from the loss of his mother in a brutal murder, Jake has spiraled out of control and Sloane has barely been able to keep him out of jail. So when his old friend, detective Tom Molia, suggests that they take their sons on a guys-only camping trip, Sloane gratefully accepts. What Sloane imagines will be the perfect excursion turns into a nightmare when the boys are arrested for vandalizing a general store late at night while their fathers are asleep. The next morning, before Sloane and Molia even realize they're gone, their sons are tried, convicted, and sentenced by the presiding judge to six months in the county wilderness detention camp. For the teenagers, a grueling physical and psychological ordeal begins. As Sloane fights the conviction against the boys, he discovers that local judge Earl Boykin's authority seems to extend beyond the confines of his courtroom. Meanwhile, on the inside, Jake is forced to grow up quickly and soon learns the hard way that this detention center has a very different purpose than rehabilitating troubled youths. With their legal options exhausted, Sloane and Molia will do anything to save their sons -- even mount a daring rescue operation that could win the boys their freedom...or cost all of them their lives.

List of All Editions of Robert Dugoni David Sloane Series: Books 4-5: Murder One & the Conviction