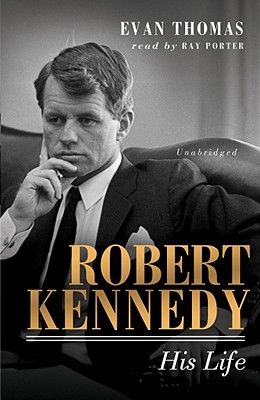 by
Evan Thomas and Ray Porter

Traditionally, Robert F. Kennedy has been viewed as either the Good Bobby, who saw wrong and tried to right it, or the Bad Bobby of countless conspiracy theories, the ruthless and manipulative bully who plotted with the Mafia to kill Castro and lusted after Marilyn Monroe. Evan Thomas' achievement is to realize RFK as a human being, to bring to life an extraordinarily complex man who was at once kind and cruel, devious and honest, fearful and brave. The portrait that emerges is unvarnished but sympathetic, packed with new details about Kennedy's early life and his behind-the-scenes machinations: his involvement in a cheating incident in prep school, his first attempt at romance, and his many back-channel political operations-with new revelations about the 1960 and 1968 presidential campaigns, the Cuban Missile Crisis, and his long struggles with J. Edgar Hoover and Lyndon Johnson, both of whom were subtly and not-so-subtly trying to blackmail the Kennedys. In a clear and fast-paced narrative, Thomas cuts through the mythology to reveal a character who, though he died young just as he was reaching for ultimate power, remains one of the century's most fascinating men.