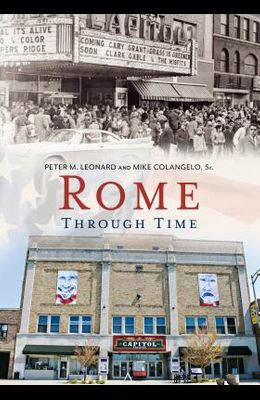 Emerging from the wilderness in upstate New York was an imposing British defense called Fort Stanwix. After exemplary service during the Revolution with the honor of flying the first stars and stripes in battle, it quickly fell into disrepair. The city of Rome was built on its ruins. Changing little over the next century and half this area was known as the famed downtown area which boasted hundreds of businesses. Bicentennial fever gripped Rome and with it came an age of Urban Renewal projects. Building after building fell to the wrecking ball to make way for a new and modern Rome. The National Park Service reconstructed Fort Stanwix on its original location to create a paradox of history. The first shovel of dirt was turned to start the Erie Canal here. Rome was home to Griffiss Air Force Base, the author of the Pledge of Allegiance, the only woman recipient of the Medal of Honor, the modern cheese making process and much more.