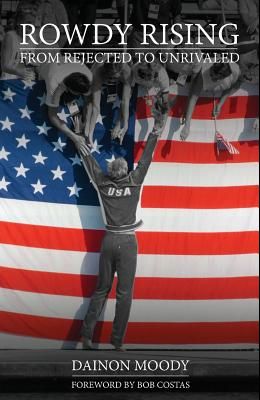 Rowdy Rising: From Rejected to Unrivaled

by
Dainon Moody and Bob Costas and Rowdy Gaines

The limited shelf life of Olympic athletes collapsed in 1980 for Rowdy Gaines and about 280 other elite U.S. athletes when President Jimmy Carter announced America would boycott the Games in Moscow. Instead of distinguishing his country on an international stage, the world's fastest swimmer found himself instead languishing in the lifeguard chair at his hometown pool. Author Dainon Moody details a story of Gaines' resurrection during an earlier era when sponsorships eluded star swimmers. Rather than cashing checks for wearing sports-company merchandise, the 20-something competitor worked nights as a hotel desk clerk, practiced laps for hours each day and lived in virtual poverty. Moody's driving voice captures the naysayers who dismissed the old guy in the pool and then it brings home the explosive performances that delivered three gold medals before cheering throngs at the Olympics in Los Angeles. But Rowdy Rising takes readers beyond the dark-horse podium glory of 1984 and goes on to examine Gaines' lifelong immersion into what may be the world's oldest sport. Cataloging everything from childhood swims in gator-infested neighborhood lakes to records set at the Masters level, the biography of this U.S. hero touches everyone who has ever waded into the water. Perhaps most surprising is the athlete's sudden paralysis and recovery from the potentially life-threatening Guillain-Barre Syndrome. The author also gives readers a perch in the broadcast booth as Gaines' recounts experiences commentating the last six Olympics for NBC and others. The 220-plus page tome is a contextual must-read for anyone anticipating watching the drama of Rio de Janeiro during the Summer of 2016. And beyond the spotlight of world-class competition, the story of Rowdy Gaines brings home the critical need for infant and youth swim lessons. It also serves as an inspiration for every kid who flounders in high school. and every aging adult who looks to the water for the challenges it can bring. In all aspects, it is a story of one man rising above his circumstances.