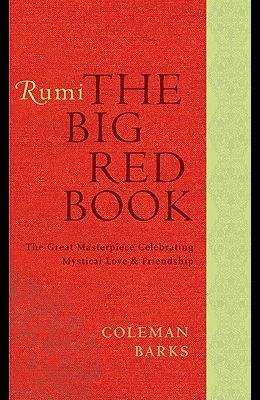 Rumi: The Big Red Book: The Great Masterpiece Celebrating Mystical Love and Friendship: Odes and Quatrains from the Shams

Rumi's Divani Shamsi Tabriz's most familiar form is as a big red book, hence the name. Barks is famous for his renderings of Rumi's poetry and his work on these particular poems has never been published anywhere. This book represents over 33 years on Rumi's seminal classic.

From the Back Cover Considered one of the masterpieces of world literature, The Big Red Book is perhaps the greatest work of Rumi, the medieval Sufi mystic who also happens to be the bestselling poet in America. Rumi was born in 1207 to a long line of Islamic theologians and lawyers on the eastern edge of the Persian Empire in what is now Afghanistan. In order to escape the invading Mongol armies of Genghis Khan, his family moved west to a town now found in Turkey, where he eventually became the leader of a school of whirling dervishes. It was a fateful day in 1244 when he met Shams Tabriz, a wild mystic with rare gifts and insight. The renowned scholar Rumi had found a soul mate and friend who would become his spiritual mentor and literary muse. What I had thought of before as God, Rumi said, I met today in a human being. Out of their friendship, Rumi wrote thousands of lyric poems and short quatrains in honor of his friend Shams Tabriz. They are poems of divine epiphany, spiritual awakening, friendship, and love. For centuries, Rumi's collection of these verses has traditionally been bound in a red cover, hence the title of this inspired classic of spiritual literature.