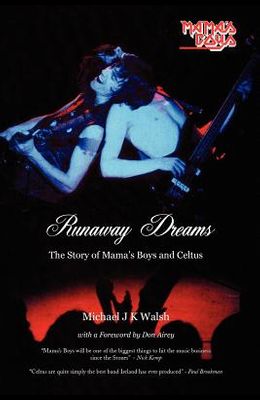 Runaway Dreams: The Story of Mama's Boys and Celtus

Runaway Dreams tells the story of brothers Pat, John and Tommy McManus who, as Mama's Boys, wrote their own chapter in the history of rock music. From a farmhouse in Derrylin, Northern Ireland, and a family steeped in the traditions of Irish folk music, the three brothers set out at the height of 'The Troubles' to make their mark on a world stage. Given an early leg up by Barry Devlin of Horslips, then by Hawkwind and Wishbone Ash, their success was assured when Phil Lynott chose Mama's Boys to accompany Thin Lizzy on their farewell tour. The band went on to circuit the world many times over, sharing the stage with the likes of Deep Purple, Rush, Sting, Black Sabbath, Rory Gallagher, and Foreigner; and touring in the company of Twisted Sister, Scorpions, Iron Maiden, Ratt and Bon Jovi. At the height of their success tragedy struck the band when youngest brother, Tommy, after years of struggle, died of leukaemia at the age of 28. There could be no Mama's Boys without Tommy, and yet it was unthinkable for the two remaining brothers not to play on. So, after a brief hiatus, the music and the successes continued with Pat and John's new venture, Celtus. Playing their debut at the Royal Albert Hall, the band went on to win the 1998 Irish World Music Award, ahead of U2, The Corrs and Enya, and toured with Sheryl Crow, Deacon Blue, Paul Carrack and Jimmy Nail. Their final performance was with the BBC Symphony Orchestra. Runaway Dreams is the story of a band of brothers who, through passion, talent, loyalty and determination, became cultural icons in Ireland and in the words of Mary Anne Hobbs 'living, breathing Irish history.' Michael Walsh lost count years ago of how many times he saw Mama's Boys, and of how many nights he hitched home in the rain through the back roads of Northern Ireland after their shows. He is now, in addition to being a Mama's Boys and Celtus fan, an Associate Professor of Art History at Nanyang Technological University, Singapore. Previous books include: This Cult of Violence (Yale University Press, 2002); A Dilemma of English Modernism (University of Delaware Press, 2007); Hanging a Rebel (Lutterworth Press, 2008) and London, Modernism and 1914 (Cambridge University Press, 2010).

Frequently Asked Questions About Runaway Dreams: The Story of Mama's Boys and Celtus

0
|   0  reviews
Did you read Runaway Dreams: The Story of Mama's Boys and Celtus? Please provide your feedback and rating to help other readers.
Write Review

List of All Editions of Runaway Dreams: The Story of Mama's Boys and Celtus