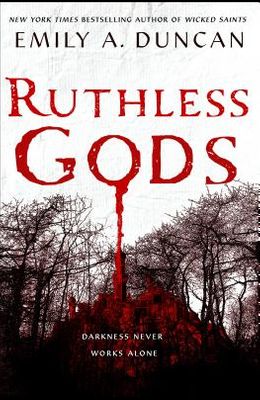 by
Emily A Duncan

The stunning sequel to instant New York Times bestseller, Wicked Saints Ruthless Gods opens the door to a world of fallen gods and eldritch horrors... Gruesome, grotesque, and so, so glorious. - Erin A. Craig, New York Times bestselling author of House of Salt and Sorrows Nadya doesn't trust her magic anymore. Serefin is fighting off a voice in his head that doesn't belong to him. Malachiasz is at war with who--and what--he's become. As their group is continually torn apart, the girl, the prince, and the monster find their fates irrevocably intertwined. Their paths are being orchestrated by someone...or something. The voices that Serefin hears in the darkness, the ones that Nadya believes are her gods, the ones that Malachiasz is desperate to meet--those voices want a stake in the world, and they refuse to stay quiet any longer. In her dramatic follow-up to Wicked Saints, the first book in her Something Dark and Holy trilogy, Emily A. Duncan paints a Gothic, icy world where shadows whisper, and no one is who they seem, with a shocking ending that will leave you breathless. Ruthless Gods will leave fans demanding the final installment in the trilogy. - Christine Lynn Herman, author of The Devouring Gray This edition uses deckle edges; the uneven paper edge is intentional.