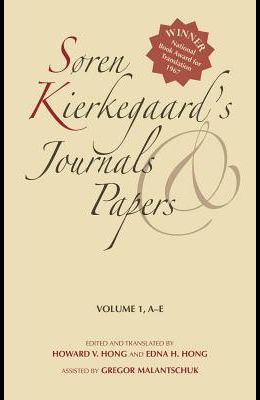 'I can be understood only after my death, ' Kierkegaard noted prophetically: the fulfillment of this expectation for the English-speaking world a century and a quarter later is signified by the English translation in authoritative editions of all his works by the indefatigable Howard and Edna Hong. . . . The importance of the Papirer] was emphasized by Kierkegaard himself. . . . The essentially religious interpretation he gave to his mission in life and his personal relationships is now documented clearly and exhaustively. . . . Obviously, these editions are essential for academic and large general collections. --Library Journal From this point on, anyone interested in tracking down a Kierkegaardian theme will have to consult the Hong presentation as well as the books of Kierkegaard. --Annual Review of Philosophy The translations are entirely excellent. One envies the Hongs their capacity in language, the breadth of their reading in Kierkegaard and his sources, and the dedication they brought to this Herculean task. The assistance of Gregor Malantschuk has contributed materially to the notes which serve as trenchant summaries of Kierkegaard's thought on the topics. . . . This is indeed a monumental work. --Review of Metaphysics . . . an] astonishing labor of editing and translating . . . --International Studies in Philosophy Howard and Edna Hong have brought to the task solid scholarship, linguistic competence, an imaginative and useful arrangement of the material, and a scrupulous self-effacement before the work. No one could ask for more. --Citation of the Judges at the National Book Awards We must be grateful to the Hongs for their enormous labor. . . . Kierkegaard's Journals and Papers are worth having for angry days, or 'inward' days; especially when they have been translated in as lively and sensitive a manner as are the texts in this first volume. --Nation The incidental writings of S ren Kierkegaard, published in the twenty-volume Danish edition of the Papirer, provide direct access to the thought of the many-faceted nineteenth-century philosopher who exerted so profound an influence on Protestant theology and modern existentialism. This important material, which Danish scholars regard as the key to the scriptures of Kierkegaard's other work, spans his entire productive life, the last entry of the Papirer being dated only a few days before his death. These writings have been previously inaccessible in English except for a few fragmentary selections; the most significant writings are now being made available in this definitive seven-volume edition under the editorship of two expert scholars and translators. Kierkegaard's scattered writings fall into three main subject groupings: journal entries of varied content, notes and early versions of his published material, and personal reactions to his reading and study. In length and degree of polish they range from brief and cryptic notes to extensive lecture material, finished travel sketches, and extended philosophical speculation. The translators provide annotations, copious notes, and a collation of entries with the Danish Papirer. The editors group the selections in Volumes I through IV by theme, with all entries on a given subject under the same heading. Within subject headings, entries are arranged chronologically, making it feasible to trace the evolution of Kierkegaard's thought on a specific topic. Volumes V and VI are devoted to autobiographical material. Volume VII contains an extensive index with topical crossreferences.

List of All Editions of Søren Kierkegaard's Journals and Papers, Volume 1: A-E