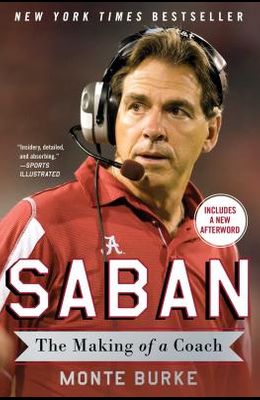 Saban: The Making of a Coach

An instant New York Times bestseller--the insidery, detailed, and absorbing ( Sports Illustrated ) biography of Nick Saban, the polarizing University of Alabama football coach who not only transformed the college game, but might also be the best ever at winning. As the head coach of the University of Alabama's football team, Nick Saban is perhaps the most influential--and polarizing--man in the sport. His program-building vision has delivered packed stadiums, rabid fans, legions of detractors, countless NFL draft picks, and a total of four national championships, including three in the last five years. He is the only coach in the college football's modern era (since 1936) to win national championships at two different schools. Monte Burke's Saban --the first major biography of the man who has come to epitomize the game--presents this towering figure with a never-before-seen human depth. Though a great deal is known about Nick Saban the coach, not much is known about Nick Saban the man. Little is written about his early climb through the coaching ranks as an assistant in college and in the NFL, or his head-coaching stints at Michigan State and Louisiana State and his struggles as a pro coach with the Miami Dolphins. Through unprecedented interviews with more than 250 friends, coworkers, rivals, former players, and others, Burke reveals the defining moments of the coach's life, including the beginning of his recruiting career at age ten; his dramatic departures from three different high-profile football teams; and the building of championship programs at Louisiana State and Alabama. In Saban , Burke has written a winning, definitive portrait of a fascinating character.... A no-holds-barred glimpse into the quest for perfection ( Publishers Weekly ).