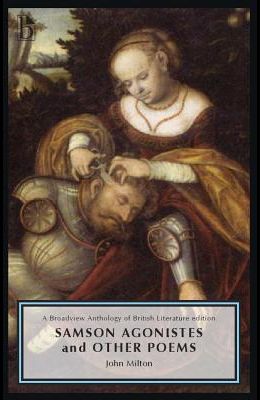 Samson Agonistes and Other Poems: A Broadview Anthology of British Literature Edition

From the Back Cover In Samson Agonistes , Milton's last great work, he addresses questions that pressed insistently on the imagination of all who were unhappy with the changes wrought by the Restoration. How do we respond to the experience of defeat, and to fears of having been abandoned by the divine? How do we know when our actions accord with divine will, or when they are fueled instead by our fallen desires and weaknesses? At what point do accommodation and compromise with an enemy become a failure of will? What constitutes true heroism? To what extent is violence justified in the cause of freedom? In this dramatic poem, Milton abandons the regularly maintained blank verse of Paradise Lost and Paradise Regained and employs varying line lengths, mixes blank verse with lyric rhyme, and takes such liberties with scansion that the poem often has the feel of modern free verse. To many scholars, the poetry of Samson Agonistes seems the culminating literary expression of a poet who had already demonstrated his mastery of traditional forms and felt free to abandon convention to create the poetic effects he desired. In addition to Samson Agonistes , this volume includes a selection of Milton's best-known short poems (also taken from The Broadview Anthology of British Literature ). The biblical material concerning Samson is also included in an appendix.

Books similiar to Samson Agonistes and Other Poems: A Broadview Anthology of British Literature Edition

List of All Editions of Samson Agonistes and Other Poems: A Broadview Anthology of British Literature Edition