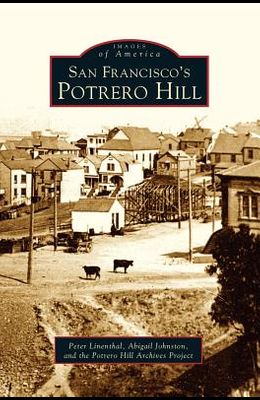 Part of the Images of America: California Series
by
Peter Linenthal and Abigail Johnston and The Potrero Hill Archives Project

In the early 1800s, it was called the Potrero Nuevo, or new pasture. Gold-rush squatters soon put the squeeze on Mission Dolores's grazing cattle, and when the fog lifted, Potrero Hill became the first industrial zone in San Francisco, with iron-smelting plants, butcheries, and shipbuilding dominating the waterfront during the late 19th century. The Hill has been home to immigrants from Scotland, Ireland, China, Russia, Mexico, and from everywhere in between. These days, many of the factories and warehouses have been converted into housing and offices for techies. And for the record, the crookedest street in San Francisco is not Lombard--it's Vermont, between 20th and 22nd.

Images of America: California Series In Order - By Peter Linenthal