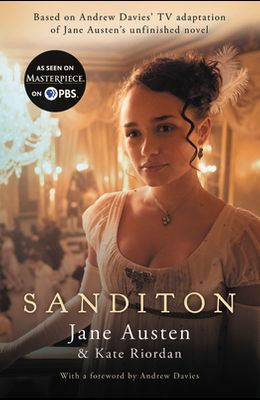 by
Jane Austen and Kate Riordan

In the vein of Downton Abbey , Jane Austen's beloved but unfinished masterpiece-often considered her most modern and exciting novel-gets a spectacular second act in this tie-in to a major new limited television series. Written only months before Austen's death in 1817, Sanditon tells the story of the joyously impulsive, spirited and unconventional Charlotte Heywood and her spiky relationship with the humorous, charming (and slightly wild ) Sidney Parker. When a chance accident transports her from her rural hometown of Willingden to the would-be coastal resort of the eponymous title, it exposes Charlotte to the intrigues and dalliances of a seaside town on the make, and the characters whose fortunes depend on its commercial success. The twists and turns of the plot, which takes viewers from the West Indies to the rotting alleys of London, exposes the hidden agendas of each character and sees Charlotte discover herself... and ultimately find love.