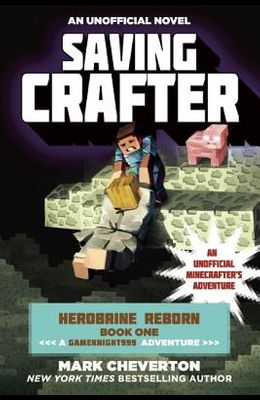 Gameknight999's best friend in Minecraft is dying, and only the User-that-is-not-a-user can save him Herobrine, the artificially intelligent virus intent on escaping Minecraft and infecting the Internet with his evil, was captured after an epic showdown on the shores of Minecraft. Gameknight999, having trapped the virus in an unlikely prison, saved the lives of his friends in the game and was finally able to return to the physical world. Everyone thought the Last Battle was over and Minecraft was safe . . . but they were wrong. The powerful evil held within Herobrine's prison is leaking out into the fabric of Minecraft and attacking Crafter, the most sensitive NPC on the server and Gameknight999's best friend. With Crafter's life in jeopardy, Gameknight999 and his father, a Minecraft noob, have no choice but to return to the game again. As they journey to The End to destroy Herobrine, Gameknight and his friends will face two of Herobrine's most hated creations: the zombie-king, Xa-Tul, and the king of the endermen, Feyd. With Crafter's life hanging by a thread, Gameknight999 must find a way to thwart Herobrine's plans before the virus's poison kills his best friend. Sky Pony Press, with our Good Books, Racehorse and Arcade imprints, is proud to publish a broad range of books for young readers--picture books for small children, chapter books, books for middle grade readers, and novels for young adults. Our list includes bestsellers for children who love to play Minecraft; stories told with LEGO bricks; books that teach lessons about tolerance, patience, and the environment, and much more.In particular, this adventure series is created especially for readers who love the fight of good vs. evil, magical academies like Hogwarts in the Harry Potter saga, and games like Minecraft, Terraria, and Pokemon GO. While not every title we publish becomes a New York Times bestseller or a national bestseller, we are committed to books on subjects that are sometimes overlooked and to authors whose work might not otherwise find a home.

List of All Editions of Saving Crafter: Herobrine Reborn Book One: A Gameknight999 Adventure: An Unofficial Minecrafter's Adventure