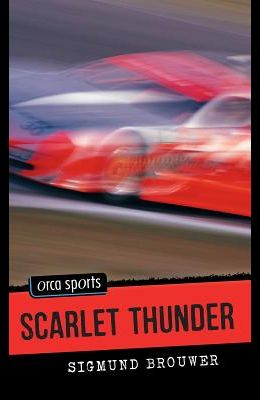 Book #5 in the Sports Mystery Series
by
Sigmund Brouwer

Trenton Hiser is trying to walk in the footsteps of his uncle, Mike Hiser, a successful Hollywood director. During Trenton's summer vacation, he goes with his uncle to film the inside story of Scarlet Thunder, a top-level stock-car racing team. As they film the action, too many things go wrong, deadly mistakes are made and Trenton finds out that much more than the race is at stake.

From the Back Cover In a quick movement, he filled my viewfinder completely. Before I could figure out what had happened, he had grabbed me by the shoulders. He pulled a ballpoint pen from his pocket and stuck the sharp end of it against my throat. It hurt. Bad. I wondered if I was bleeding. If he pushed any harder, the pen could bust through my windpipe. He continued, still sounding oddly casual, like I said. When I take this kid's camera and walk out of here with the videocassette, there is definitely nothing you can prove. Will following his dreams take Trenton too far? All Trent has ever wanted is to be a filmmaker. But when his Uncle Mike, a Hollywood director, asks Trent to help him film the high-pressure world of stock-car racing, Trent gets a lot more than some great footage. Things go horribly wrong both on the track and off, but it's up to Trenton to figure out how to save his uncle's career without losing everything he values.