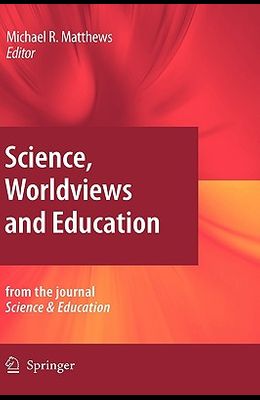 Science, Worldviews and Education: Reprinted from the Journal Science & Education

This book has its origins in a special issue of the journal Science & Education (Volume 18 Numbers 6-7, 2009). The essay by Costas Skordoulis - 'Science and Worldviews in the Marxist Tradition' - did not appear in that special issue due to a mistake in production scheduling. It was published in an earlier issue of the journal (Volume 17 Number 6, 2008), but has been included in this book version of the special issue. As explained in the Introduction, the catalyst for the journal special issue was the essay on 'Science, Worldviews and Education' submitted to the journal by Hugh G. Gauch Jr. This was circulated to the other contributors who were asked to write their own contribution in the light of the arguments and literature contained in the paper. Hugh made brief 'Responses and Clari?cations' after the papers were written. However the Tanis Edis article on Islam and my own article on Priestley were processed too late to bene't from Hugh's appraisal. The journal is associated with the International History, Philosophy, and Science Teaching Group which was formed in 1987. The group stages biennial international conferences and occasional regional conferences (details can be found at www. ihpst. org). The group, though the journal, conferences, and its electronic newsletter (at www. ihpst.

From the Back Cover Science, Worldviews and Education is an important and timely theme as many national and provincial education authorities are requiring that students learn about the Nature of Science (NOS), and that they learn about the broader historical and cultural contexts of science and its practice. Such topics give rise to questions about science and worldviews: What is a worldview? Does science have a worldview? Are there specific ontological, epistemological and ethical prerequisites for the conduct of science? How can scientific worldviews be reconciled with seemingly discordant religious and cultural worldviews? Questions about science and worldviews have had a long history. The Galilean revolution, the Darwinian revolution, and the Einsteinian revolution were all associated with profound cultural, religious and philosophical transformations and debates. The European Enlightenment was the first such major impact. Globalisation and the science-based industrialization of many non-Western societies, with their own religious traditions and worldviews, make urgent the understanding of science and its inter-relation with worldviews, and for the development of informed and appropriate science education. Contributors to this anthology include scientists, philosophers, theologians, and educators. They all share the conviction that science education has to promote a richer understanding of science and its relations with culture, religion, philosophy, and ultimately the worldview of students. What is a scientific worldview? How does it differ from other worldviews? Is it possible to be educated in science yet lack a scientific worldview? Can science thrive in a society where such a worldview is lacking? These questions and more are discussed in depth by a distinguished group of scientists, philosophers, educators and theologians in this uniquely valuable volume. Albert H. Teich , Director, Science & Policy Programs, American Association for the Advancement of Science, USA This wide ranging collection of essays is an excellent way to enter the too often neglected territory of how science and science education relate to larger socio-cultural world views. Peter Machamer , Department of History and Philosophy of Science, University of Pittsburgh, USA