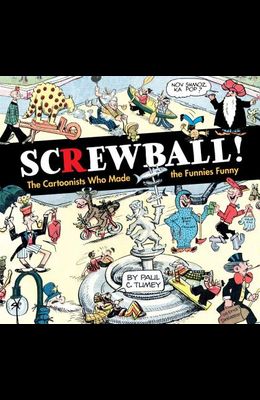 Screwball! the Cartoonists Who Made the Funnies Funny

The story of screwball comics, with new research and rare art from some of the most hilarious cartoonists of all time. Both humorous and educational, this book is aimed at a general audience of all ages and at university comics studies programs. Before screwball became a movie genre, it was a staple of other forms of American culture, including newspaper comic strips. Emerging from the pressures of a rapidly accelerating technological and information-drenched society, screwball comics offered a healthy dose of laughter and perspective. The disruptive, manic, and surreal verbal-visual comedy of these funnies fostered an absurdist sensibility embraced by The Marx Brothers (who took their names from a popular comic strip), W. C. Fields, Tex Avery, Spike Jones, Ernie Kovacs, and Mad magazine. Comics scholar Paul C. Tumey traces the development of screwball as a genre in magazine cartoons and newspaper comics, presenting the work of around fifteen cartoonists, with an art-stuffed chapter on each. The book offers a wealth of previously un-reprinted comics unleashing fresh views of some of America's greatest and most-loved cartoonists, including George Herriman ( Krazy Kat ), E.C. Segar (creator of Popeye), Rube Goldberg ( The Inventions of Professor Lucifer G. Butts, A.K. ), Bill Holman ( Smokey Stover ), and Frederick Opper ( Happy Hooligan ). In addition, readers will be delighted to discover previously lost screwball masters, such as Gene Ahern ( The Squirrel Cage ), Gus Mager ( Sherlocko the Monk ), Boody Rogers ( Sparky Watts ), Milt Gross ( Count Screwloose ), George Swanson ( $alesman $am ) and others.