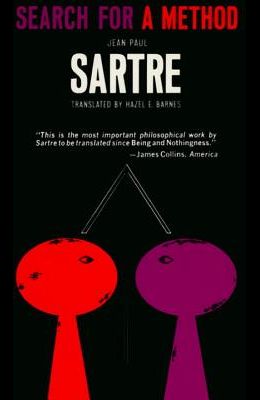 Search for a Method

From one of the 20th century's most profound philosophers and writers, comes a thought provoking essay that seeks to reconcile Marxism with existentialism. Exploring the complicated relationship the two philosophical schools of thought have with one another, Sartre supposes that the two are in fact compatible and complimentary towards one another, with poignant analysis and reasoning. An important work of modern philosophy, Search for a Method has a major influence on the current perceptions of existentialism and Marxism. This is the most important philosophical work by Sartre to be translated since Being and Nothingness. --James Collings, America

From the Back Cover 'Search for a Method' is a separate and introductory essay published together with 'Critique of Dialectical Reason'. It is the search for a method by which the existentialist Marxist may hope to understand both individual persons and history.