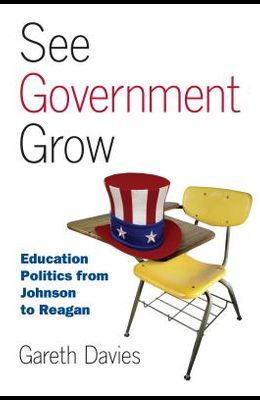 When Congress endorsed substantial aid to schools in 1965, the idea that the federal government had any responsibility for public education was controversial. Twenty years later, not only had that controversy dissipated, Washington's role in education had dramatically expanded. Gareth Davies explores how both conservatives and liberals came to embrace the once daring idea of an active federal role in elementary and secondary education and uses that case to probe the persistence-and growth-of big government during a supposedly antigovernment era. By focusing on institutional changes in government that accompanied the civil rights revolution, Davies shows how initially fragile programs put down roots, built a constituency, and became entrenched. He explains why the federal role in schools continued to expand in the post-LBJ years as the reform impulse became increasingly detached from electoral politics, centering instead on the courts and the federal bureaucracy. Meanwhile, southern resistance to school desegregation had discredited the states rights argument, making it easier for conservatives as well as liberals to seek federal solutions to social problems. Although LBJ's landmark Elementary and Secondary Education Act deferred to local control, the legislation of the Nixon-Ford years issued directives that posed greater challenges to traditional federalism than Johnson's grand ideals. As Davies shows, the new political climate saw the achievement of such breakthroughs as mandated bilingual education, school finance reform, and the Education for All Handicapped Children Act--measures that, before the seventies, would have been considered unthinkably intrusive by liberals as well as conservatives. And when Ronald Reagan promised to abolish the Department of Education, conservatives worked with liberals to derail his agenda. Davies' surprising study shows that the distancing of American conservatism from its anti-statist traditions helped pave the way for today's big government conservatism, which enabled a Republican-dominated Congress to pass No Child Left Behind. By revealing the endurance of Great Society values during a period of Republican ascendance, his book opens a window on our political process and offers new insight into what really makes government grow.