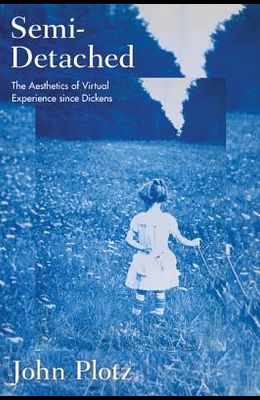 Semi-Detached: The Aesthetics of Virtual Experience Since Dickens

When you are half lost in a work of art, what happens to the half left behind? Semi-Detached delves into this state of being: what it means to be within and without our social and physical milieu, at once interacting and drifting away, and how it affects our ideas about aesthetics. The allure of many modern aesthetic experiences, this book argues, is that artworks trigger and provide ways to make sense of this oscillating, in-between place. John Plotz focuses on Victorian and early modernist writers and artists who understood their work as tapping into, amplifying, or giving shape to a suspended duality of experience. The book begins with the decline of the romantic tale, the rise of realism, and John Stuart Mill's ideas about social interaction and subjective perception. Plotz examines Pre-Raphaelite paintings that take semi-detached states of attention as their subject and novels that treat provincial subjects as simultaneously peripheral and central. He discusses how realist writers such as Charles Dickens, George Eliot, and Henry James show how consciousness can be in more than one place at a time; how the work of William Morris demonstrates the shifting forms of semi-detachment in print and visual media; and how Willa Cather created a form of modernism that connected aesthetic dreaming and reality. Plotz concludes with a look at early cinema and the works of Buster Keaton, who found remarkable ways to portray semi-detachment on screen. In a time of cyberdependency and virtual worlds, when it seems that attention to everyday reality is stretching thin, Semi-Detached takes a historical and critical look at the halfway-thereness that audiences have long comprehended and embraced in their aesthetic encounters.

From the Back Cover Semi-detachment--the state of simultaneous half-waking and half-dreaming--proves just the sort of big, loose idea that in the hands of a playful and curious reader like Plotz gives us fresh insight into the mind's uneven engagements with the real. This book offers a fascinating exploration of how the late realist novel reflects on that special kind of doubled (in)attention--and invites its readers to do so too. --Elizabeth Helsinger, University of Chicago John Plotz's exciting and wide-ranging book names, explores, and traces the genealogy of a familiar yet undertheorized feature of nineteenth- and early twentieth-century literature: an aesthetic of 'semi-detachment.' Plotz has established himself as one of the most important critics in his field, and this book will clearly be a major contribution. Its scholarship is extraordinary, its writing is elegant and effective, and its argument is new and exciting. --Elizabeth Carolyn Miller, University of California, Davis Semi-Detached tells the history of an aesthetic experience--semi-detachment--that is produced and described by artworks across the nineteenth century, from the romantic era to early Hollywood. This unusually confident and engrossing book, at once magisterial and experimental, sweeps across major arcs of aesthetic philosophy and literary history, but also attends to fine textual details. Plotz is a skilled, veteran scholar working at the top of his game. --Jed Esty, University of Pennsylvania